President Rodrigo Duterte confidently stated in his fourth State of the Nation Address (SONA), “Our goal for the next three years is clear: a comfortable life for everybody, all Filipinos. We have made significant strides and accomplished signal milestones as a nation in the past three years.”

Such impressive rhetorics, but may we ask, Mr. President, are we in the same page?

To highlight our question, we in the Center for Women’s Resources would like to point out some of the statements expressed by the President:

1.  “I implore those who occupy positions of power and authority, to let your deeds and accomplishments do the talking. Lead by example. Words ring hollow when not followed by positive and prioritized action.

The danger of the president’s call in leading by example means following his misogynistic attitude, which made it worse for women. Violence against women has continued, as one woman or girl is raped every hour. Worse, state-perpetrated VAW has become rampant. Since President Duterte became the president, more than 50 cops were involved in various cases of violence against women.

2. ” I have met the enemy face-to-face and sadly, the enemy is “us.” We are our own tormentors — addressing the Filipino people — we are our own demons; we are as rapacious predators preying on the helpless, the weak and the voiceless.”

Such collaboration wrought havoc in the lives of Filipinos in general and women in particular. This administration’s flagship program, Build! Build! Build!, has displaced hundreds of thousands of Filipinos both in urban and rural areas and has destroyed hundreds of hectares of agricultural land. For instance, the Metro Manila Flood Management Program has displaced 800,000 families living along 56 drainage areas and pumping stations, while the MRT-7 project alone has destroyed 300 hectares of agricultural land.

3. “The most important number, though, is the six million Filipinos we need to pull out from poverty.”

As long as the socio-economic agenda of the government relies on a neoliberal framework, Filipinos can never be pulled out from poverty, where women are considered one of the poorest sectors in the country, with poverty incidence of 22.5 percent. In rural areas, nine out of 10 farmers are still landless. Under Duterte’s term, farmers still top the sectors with highest poverty incidence rate at 34.3 percent; while in urban areas, poor Filipinos endure unemployment and housing woes.

Those who are ‘lucky’ to get jobs, are confronted with issues of contractualization, low wage, lack of benefits and security of tenure. With all these issues that confront Filipino workers, Philippines has consistently topped the list for world’s worst countries for workers.

Worse, Filipino people continue to endure poverty, landlessness, and lack of access to basic social services. All these are aggravated with the continuing burden brought about by Tax Reform for Acceleration and Inclusion (TRAIN) Law which caused the price increase of basic food and non-food commodities, petroleum products, among others.

4. “War leaves widows and orphans in its wake. I am not ready or inclined to accept the occurrence of more destruction, more widows and more orphans, should war, even on a limited scale, breaks out.”

Although the president’s statement only refers to his silence over the West Philippine Sea issue, he should reflect on how the other wars his government has created has also produced widows and orphans. His war on drugs under Oplan Tokhang killed 20,000 individuals, including minors and women, whose deaths remain ‘under investigation’. His war against activists and human rights defenders under Oplan Kapayapaan and Oplan Kapanatagan has gained the Philippines international attention because of the unabated state-sponsored human rights violations against children, students, women, indigenous peoples, journalists, activists, lawyers, farmers, religious workers, among others. In 2018 alone, more than 500 individuals fell victim to extrajudicial killings, while about 2000 individuals were illegally arrested and 203 political detainees were jailed since 2016, many of whom were ailing senior citizens.

So, are we really on the same page with the President? For us women, comfortable life for Filipinos means living without any fear of getting killed, arrested, abused, or raped. Further, the daily struggle to survive amidst poverty, landlessness, and joblessness is another source of distress for majority of Filipinos. We have already reached the half-way make of President Duterte’s leadership. We witnessed how his government disrespects human dignity and disregards Filipino’s quality of life. If the Duterte government continues its present disposition with “great fervor”, then we should caution ourselves for more doublespeak and rhetorics. And we shall be alert to retort and tell the truth as well as act to get a genuine comfortable life for every toiling woman, every toiling Filipino. #

CWR STATEMENT on the harassment and mistreatment of peaceful protesters at the DILG yesterday, July 16 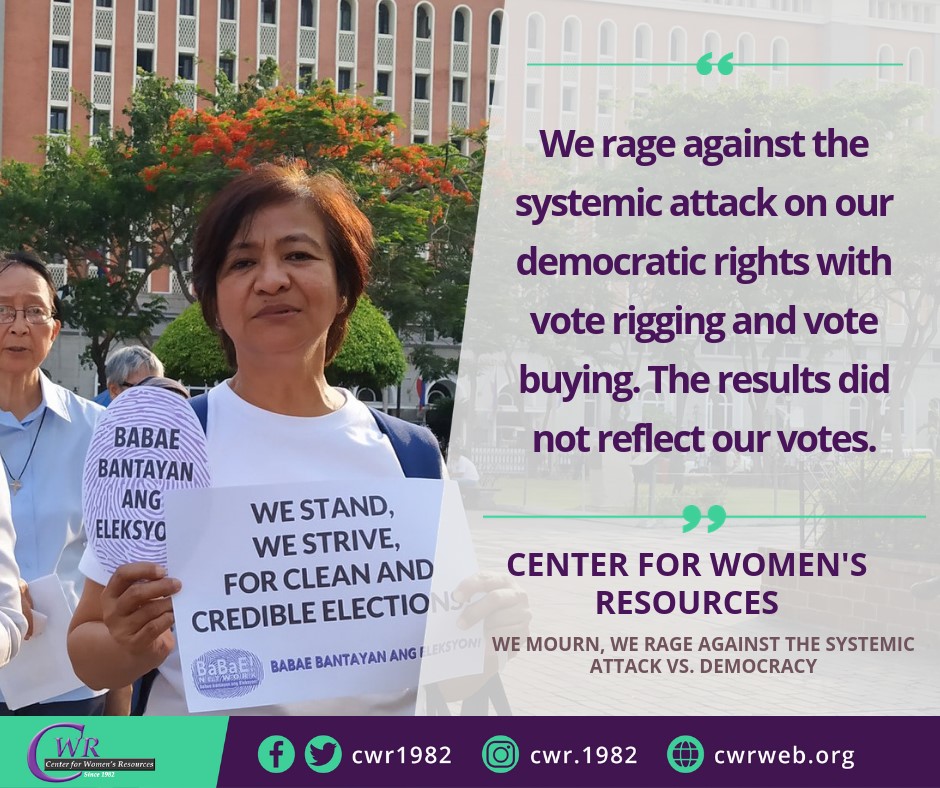 We mourn, we rage against the systemic attack vs. democracy – CWR