The Center for Women’s Resources (CWR) welcomes and strongly supports the legislative proposal House Bill 2173 or the Security of Tenure Bill recently filed by Gabriela Women’s Party and Makabayan Bloc in the 19th Congress. The Bill which seeks to end all forms of contractualization is long overdue and has always been one of many failed promises made by past administrations.

With the current pandemic situation, high unemployment rate, the dwindling income of Filipino families, rising prices of consumer goods, and concerning increases in poverty and inequality, CWR believes that Congress and this administration must immediately pass legislation to protect and advance workers’ rights.

Even before the pandemic, Filipino women workers are found in precarious labor and 60% are considered economically insecure. With the economic contraction brought by the pandemic, workers under contract were pushed to further insecure conditions as they were the first to lose their jobs. They live at a critical point, vulnerable, and often with no buffer against economic shocks.

CWR, in its recent study on the conditions of women workers amid the pandemic found the following:

1. Contractual workers have fewer employee benefits like company medical insurance, and this forces employees/workers to pay out-of-pocket for expenses that under normal circumstances are covered by an employer. Although the government mandated employers to pay for certain benefits such as SSS, Philhealth and PAG-IBIG for all types of workers, some employers do not pay for these benefits. Other benefits that contract workers do not receive compared to regular workers include paid vacation/ sick leave, and 13th month pay.

2. Contract workers need to provide for their own retirement plans and savings for periods of unemployment.

3. “No work, no pay” rule imposed on employees by service contracts and contract workers.
4. Low wages are a disadvantage for employees who are hired on a flexible basis. Workers in these arrangements are much more likely to earn wages that are at or near the minimum wage and earn significantly less than regular workers. As a result, many of these workers are working at/or near the poverty level.

5. Contractualization undermines worker’s right to organize and form unions.
The road to pandemic recovery presents an important opportunity to reverse the trend of disadvantaged workers through enacting the Security of Tenure Bill. Further, many studies have shown that increasing women’s economic security leads to positive outcomes in health, education, and women’s participation, which are important aspects in economic development and nation-building.

It is in this light that the Center for Women’s Resources deems it imperative to legislate a genuinely pro-worker and pro-women Security of Tenure Bill that will end all forms of contractualization and violation of workers’ right to security of tenure. We challenge the Philippine Congress and the Marcos Jr. administration to decisively prioritize this legislative agenda and ensure workers’ right to work and development. 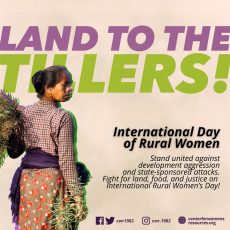