If there is one lesson in agriculture the pandemic has taught us, it is that food security through sustainable agriculture is crucial in ensuring the most vital needs of the entire population amid crisis. Small farmers are most affected by the government’s failure to concretely respond to the pandemic. In the beginning of the lockdown, strict quarantine restrictions and travel bans have prevented farmers from transporting agricultural products to markets and trading centers.

In addition, further militarization in the communities have even prevented them from going to their fields without interrogation and intimidation. In addition, farmers have suffered very low prices of agricultural products at the beginning of the lockdown, while enduring the continuous rise of prices of commodities. Relief goods and cash subsidies from the local and national government are limited, especially in far-flung rural communities, where actual government support is seldom felt. Instead of providing much needed support for farmers during the lockdown, the government prioritized Build, Build, Build, its flagship infrastructure project, through foreign loans, at the expense of farming communities. In the middle of a pandemic, farmers are in constant threat of eviction and demolition to pave ways for roads, train lines, and commercial establishments that ultimately ensures profit for local and foreign elites. Peasant women have carried the multiple burden of caring for the health and safety of their families and being the primary educators of their children as classes have gone online or modular, while ensuring their daily needs and seeking means to augment daily income in the middle of the pandemic.

The inept, unsystematic, and unscientific response of the Duterte administration to the COVID-19 pandemic, as well as the government’s lack of preparedness in disaster response have resulted in a decline of 3.8% in the value of agricultural production in 2020. Value of crop production dropped by 0.4%, livestock by 12.9%, poultry by 5.5% and fisheries by 4.7%.

According to the Department of Agriculture, around 14,759 farmers and fisherfolks lost more than 326, 566 metric tons of crops, fish, poultry and livestock and a total of Php 9.9 billion in agricultural facilities and infrastructures due to Typhoon Quinta, Rolly and Ulysses. A total of 274, 000 ha of agricultural land were damaged. Demands of release for calamity funds for affected communities have fallen into deaf ears.

Two years after the implementation of the Rice Liberalization Law, prices of palay from local producers have plummeted to Php 18.78 per kilo, from Php 21.45 in 2019 and Php 24.74 in 2018 according to the Bureau of Agricultural Statistics. However, in conversations with peasant women in the Cordillera Administrative Region, they have reported that palay prices go as low as Php 10-12 for “wet palay” and Php 13-15 for “dry palay.” But because most small farmers do not have their own drying facilities, they are forced to sell their palay at much lower prices. Palay prices in Quezon, Cavite, Bicol and Cagayan Valley also go as low as Php 10 per kilo. Noting the fact that these four provinces were worst hit by recent typhoons, peasant communities are faced with ballooning debts and constant threats of being driven away from the meagre parcels of land they till.

Agricultural liberalization results in an increase in commodity prices because it removes the government’s power to regulate prices, while allowing cartels to monopolize and set the price that they want. Towards the end of 2020, pork prices rose to Php 400-430 per kilo. Instead of supporting local hog raisers affected by the African Swine Flu (ASF), the Department of Agriculture pushed for tripling the amount of imported pork in the country, from 54,000 MT to 162,000 MT. Instead of supporting local production, the government is pushing for an “economic cha-cha,” which in essence, is a unilateral, and complete surrender of our economy to foreign ownership, as well as increasing foreign direct investments, as a measure to rebuild the country’s economy. In a separate statement, CWR have explained that Foreign Direct Investments (FDIs) have little to do with the much needed sustainable and genuine development in the countryside.

Citing IBON, CWR discussed that in 2017, agriculture only received 0.6% of total FDIs. Relaxing the economic provisions in the constitution to allow foreign ownership of land and other resources will only be detrimental to peasant communities. In addition, landlessness and massive land-grabbing continue to drive away peasant and small farmers away from agricultural production. CWR also noted that in ten years, from 2007 to 2017, the number of Filipino women engaged in agriculture has decreased from 2.9 million to 2.25 million, or a decrease of 675,000.

At the height of a global health and social crisis, peasant women have stood at the forefront of ensuring food security in their communities, managing collective gardens and their bungkalan, leading organizations for consultations and protest actions. Their urgent demands include Php 10,000 social amelioration and Php 15,000 agricultural production subsidy. If there’s any actual seriousness in the government’s pronouncements of rebuilding the economy, it must focus on the immediate needs of the people, especially, that of Filipino farmers. A sustainable and self-sufficient future is possible. The collective efforts of peasant communities to ensure their needs have proven that enough support for local production and food security will ensure economic progress for all. Thus, we must continue to push for an alternative economic framework, one that prioritizes local agricultural development instead of ensuring profit for landlords and foreign corporations through programs and policies. Furthermore, we must continue to demand government accountability for its continued subservience to US and China imperialist masters, at the expense of the majority of the Filipinos. Peasant women, along with their communities have collectively created mechanisms to respond to their daily needs amid fear of the COVID-19 pandemic and constant threats and intimidation by landlords and state forces. More importantly, farmers, along with different sectors supporting the call for genuine agrarian reform, have continued to stand together, clamouring unwaveringly from their fields to the streets, to make their demands realizable. # 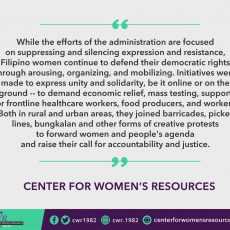 Women from different sectors celebrate International Working Women’s Month by collectively fighting for their right to health, livelihood and emancipation