Exactly 10 years after Tropical Storm “Ondoy” (international name: Ketsana) ravaged Marikina City, survivors gathered at the banks of the Marikina River, where they lit candles to commemorate a day that at once felt far away but not far enough.

The river that submerged much of the city on Sept. 26,  2009 was placid, and it was against this backdrop that survivors gave both tearful retellings of that fateful day and defiant calls for hope and collective action.

“A decade has passed, and all of us here are the lucky ones,” former Gabriela Rep. Emmi de Jesus, a resident of the city, told about 100 women and child survivors in Barangay Malanday on Thursday. “Our surroundings, our environment and our security are in our hands.”

Malanday resident Kriselda Mallari remembered that she had been cooking at about 9 a.m. on that day when she heard neighbors fretting about the rising floodwaters.

“I went out and saw the water and I was so frightened,” she said. “My children were so small.”

Mallari climbed onto the roof of her house, along with her husband and children because the second floor was already underwater. They didn’t have umbrellas so the torrential rains left them soaked and shivering for as long as four hours.

She remembered thinking: “If we die, at least we’ll die together.”

They were eventually saved by barangay rescuers but the ordeal changed her. Now, whenever the water level in the river rises and the first alert sounds, she already starts packing clothes for her and her family. When the second alert comes around, they evacuate and make their way to the nearest school.

Floods were typical in her community, she said, so she had felt no real rush to leave her house even as the water rose. But by early evening, when she and her husband finally tried to leave, the level of the deluge was taller than they were.

With no rescuers in sight, they were forced to swim through the raging waters to Sto. Niño Elementary School.

“Once we got to the school, I had no idea if my baby was still alive,” Maynigo said.

The last few weeks up until the time she gave birth were gruelling, as she faced a raft of sicknesses and the task of cleaning their muddy home.

Edz dela Cruz of the Center for Women’s Resources (CRW) called on the government to administer counseling to survivors of Ondoy and other disasters, most of whom had been deprived of professional help in working through their trauma.

“Trauma is something that should be taken seriously by the government. Those hidden wounds are as painful as those that are visible,” said CRW executive director Jojo Guan.

Marikina Mayor Marcelino Teodoro, who also attended the ceremony, said the city had been striving to apply the lessons it had learned from Ondoy, particularly in its robust early warning systems.

He said he would also lobby the national government to rehabilitate Wawa Dam so that water from the surrounding Sierra Madre would not go directly toward Marikina which, through geographical design, acted as a catch basin for rainwater from the mountain range. 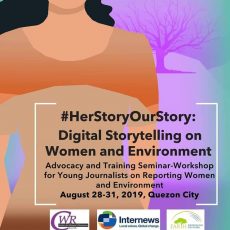 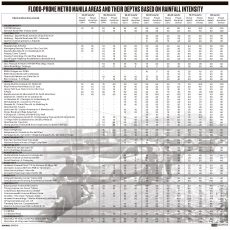