This Mother’s Day, the Center for Women’s Resources (CWR), a 37-year research and training institution for women, urges the public to genuinely pay tribute to mothers not only by recognizing their sacrifices as homemaker, but also by calling for an end to societal ills that burden all mothers, especially those who belong to the marginalized sectors.

Mothers, as caretaker of the family, are confronted with multiple burdens and often bear the brunt of social injustice, poverty, and violence.

May we not forget all the mothers who lost their children and spouses to the government’s war on drugs, crackdown against critics and activists, and unabated human rights violations against farmers and indigenous peoples.

More than 30,000 individuals were killed in relation to war on drugs. More than 500 individuals fell victim to extra judicial killings in 2018 – some are farmers, lawyers, human rights defenders, journalists, indigenous peoples, and church workers, while about 2000 individuals were illegally arrested and 203 political detainees were jailed since President Duterte assumed post.

Their wives and mothers continue to weep while they await the elusive justice.

May we not forget all the mothers whose families are burdened by lack of employment opportunities and sustainable livelihood, and who are forced to find desperate means to survive the incessant surge of prices of basic commodities and utilities.

At the end of 2018, unemployment rate in the women sector stood at 5.2 percent which translated to more than 800,000 jobless women, while underemployment was at 13.4 percent. Lack of opportunities, poverty and relentless price increases brought about by TRAIN Law, compelled mothers to buy cheaper alternatives, consume less and compromise their own health just to sustain their loved ones.

Some are imposed to avail loans that trap them further into poverty.

Lastly, may we not forget all the mothers who fell victim to violence against women and are forced to endure the trauma of witnessing their children suffer from physical, emotional and sexual abuses and harassment.

In 2018, one in four (26%) women experienced spousal and intimate partner violence, while eight in 10 children experienced violence in their lifetime. Worse, state-perpetrated violence increased, too. In 2018, more than 56 cops were found to have committed various forms violence against women.

Violence against women continues to worsen as President Duterte and his minions continue to attack and degrade women publicly. Despite the pains they have to bear, women have remained steadfast in upholding their rights and fighting for justice. Truly, women, including mothers, hold up half the sky, as their collective power can do wonders and bring about change to the society. To this end, we call on all mother-loving Filipinos to fight for and with their mothers in striving for a safe, peaceful, and sustainable society for all.

Up for Country Review on SDG: A challenge for the newly-elected officials – CWR 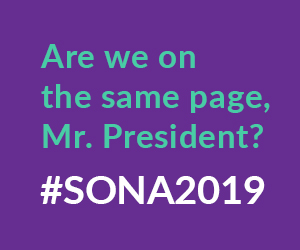